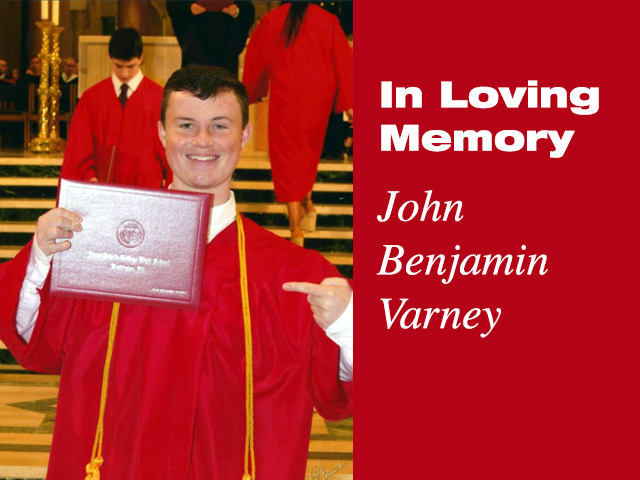 John Benjamin Varney, 19, passed away peacefully at home, surrounded by his family and the love of everyone who knew him. Born in Washington DC, John grew up in the American University neighborhood where he attended Janney Elementary, Sheridan Middle School and St. John's College HS. He was a Freshman at Elon University in Elon, NC.

John was passionate about sports and politics. He was a four-time NW Little League All-Star, and his love of baseball continued as the team manager for the St. John's Cadets baseball team. Like his mother, who grew up in Boston, he was a hard core Red Sox fan, but his real hero was New England Patriots quarterback Tom Brady. John met and threw pre-season passes with Brady last summer as part the Make-A-Wish and Kraft Family Foundation programs. Beyond baseball, he was an avid skier, swimmer, and golfer. He had his first hole-in-one at age 12, on the 4th of July in Skaneateles NY, a feat he delighted in bringing up during almost any round of golf.

John was born into politics - making the first of many White House visits before his first birthday. He was most recently at the White House last year to advocate for increased funding for pediatric cancer research. John attended his first political convention in 2008, and by 2019 had met three U.S. presidents. He was a regular consumer and critic of political commentary and analysis, with strong, well-reasoned views on the issues of the day. During his time in New York, he spent afternoons on the set of Deadline: White House and was looking forward to an internship at his favorite podcast, Pod Save America.

In 2017, John was diagnosed with metastatic osteosarcoma, a rare bone cancer. He spent the next two years undergoing surgeries and treatment at Memorial Sloan Kettering Cancer Center (MSKCC). Despite being treated in New York, John was determined to keep up with his classwork. He was supported continuously by his teammates, classmates and teachers. John was elected Homecoming King and graduated with his class in 2019, before joining the Elon University Class of 2023. The recent recurrence of his cancer led to John’s decision to become one of the first participants in a new immunotherapy clinical trial developed by MSKCC to treat osteosarcoma. John's participation in the trial did not stop the progression of his cancer, but ultimately advanced researchers' understanding of the disease, as well as promising treatment options and therapies.