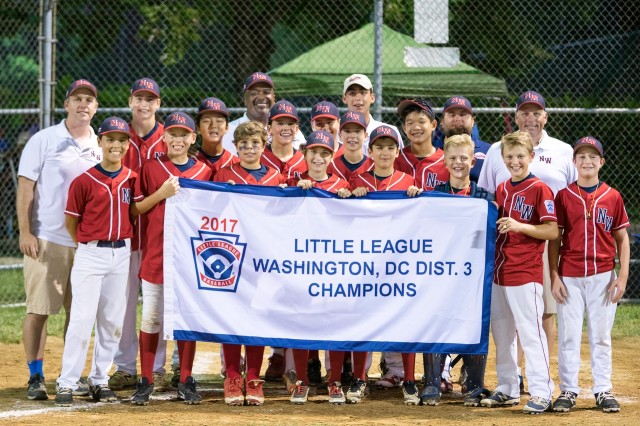 The 12U All-Star team claimed another 2017 City Championship title for Northwest Little League, adding to a dominant summer season that included championships from NWLL's 10U and 11U All-Star Teams. The win marked the first time a DC Little League has swept all three Little League Baseball age divisions in the same year.

The 12U All Stars ran the table in the city tournament but were tested throughout by a strong pool of All-Star teams from rival DC leagues. In the title game, Northwest waged a late-inning, come-from-behind win against a formidable combined all-star team of Joint Base Anacostia-Bolling, Mamie Johnson, and Satchel Paige Little Leagues.

Northwest's current league-age 12 cohort has been among the winningest in DC Little League history, going undefeated in District tournament play dating back to when they captured the 10U DC title in 2015 as well as the 11U DC title and Maryland State title in 2016.

The 12U team will head to Bristol, Connecticut to represent Washington DC in Little League’s Mid-Atlantic Regional tournament – the last stage before the Little League World Series.  Their first game is 10:00 am on Sunday, August 6th against the New Jersey State Champions with televised coverage on ESPN3.

The Washington Nationals will also honor the 12U team with an on-field ceremony before the Sep 9th game against the Philadelphia Phillies.

Good luck boys on the road to Williamsport!

The Washington Post "Against all odds, this Little League team reached the divisional championship. The final score doesn’t matter."