10 Facts We Learned About Bryce Harper 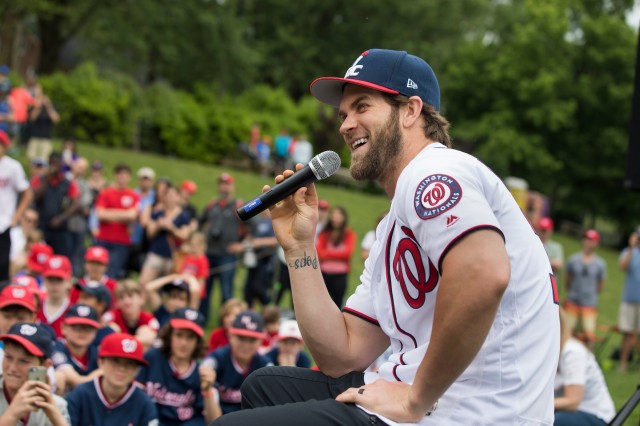 Bryce spent the majority of his time with us answering dozens of questions submitted by Northwest Little Leaguers of all ages that covered a wide range of topics, including his childhood and the types of food he like to eat.  Bryce delighted the crowd, answering questions thoughtfully, honestly, and with a sense of humor.  He also posed for pictures with the kids, gave away autographed baseballs, and shook hands or high-fived anyone who offered.

Bryce shared several insights with the kids during his visit; here’s a small sample from what we learned about him during the Q&A session with thanks to NWLL Majors player Ethan Barry who sat front and center, taking copious mental notes:

1. Bryce likes all fruit and vegetables and even likes banana-flavored baby food.

3. Bryce eats a peanut butter and jelly sandwich with a glass of milk in the 6th inning of every game.

4. Bryce’s proudest baseball moment as a youth was playing on the US National Team - he was so honored having USA on his jersey and hearing our National Anthem play in a foreign country.

5.  Bryce’s closest pal on the Nationals is Jayson Werth.  Bryce’s neighbor in the locker room is Jose Lobaton.

6.  Bryce played a lot of baseball growing up, but he also participated in several other sports and strongly discourages children from over specializing in any one sport.  As a youth, he took sustained breaks from baseball to play other sports, which ultimately helped make him a better baseball player.

7.  Bryce hit his first homer when he was 7 years old (it was such a thrilling moment that he still remembers the park and field number where he hit it).  By the age of 10 Bryce could hit a ball more than 300 feet.

8.  To help young Bryce develop strong hand-eye coordination, Bryce’s father would position a large fan behind Bryce and then throw red beans and bottle caps as young Bryce would try to hit them with a broomstick.  Bryce remarked, “After those drills, a baseball would seem like a beach ball coming in…”

9. As a Little Leaguer, Bryce would do pushups, pull ups, sit ups, and dips nearly every day to improve his strength.  Today, he works out every other day to maintain his power.

10. Bryce's father always taught him - "If you are going to do something (no matter what it is) - do it the right way."  These are words Bryce continues to live by.

Huge thank you to Bryce Harper for joining us and to the Washington Nationals for organizing an amazing morning that Northwest Little Leaguers will never forget!